How often do you encounter applause during DOR Masses?

I got an email today wondering why I hadn't posted anything here during the last year, so this is a reminder that I am now a staff writer at Cleansing Fire and that I post regularly there.
Posted by Mike Shea at 11:42 AM 6 comments:

I have been asked - and have gratefully accepted - an invitation to join the team at Cleansing Fire 2.0.

DOR Catholic will remain up and running, but I only expect to be posting here when I have something to say that does not fit comfortably into the CF mission.

Most of the time, however, you will be able to find me at www.CleansingFireDOR.com.

YNN says goodbye to Our Lady of Mercy

My former parish, Our Lady of Mercy in Greece, will be closing in three weeks. 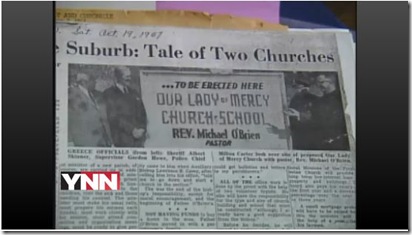 Your News Now has posted a video farewell on its web site.  See here.

The weekend the three priests serving at Holy Cross Parish in Charlotte are celebrating a combined 146 years in the priesthood. 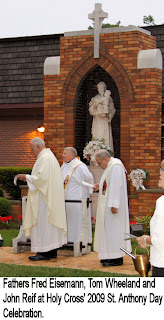 Fr. Tom Wheeland is observing the 44th anniversary of his ordination, Fr. John Reif the 45th of his, and Fr. Fred Eisemann the 57th of his.

And thank you for saying yes to God.
Posted by Mike Shea at 9:37 PM No comments: 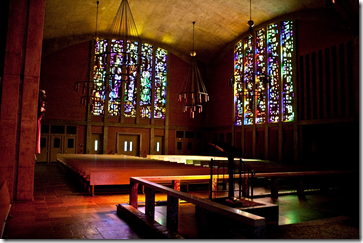 See here and at the bottom of the page here.

Last Saturday the Diocese of Little Rock ordained four men to the priesthood.  It was their largest ordination class in 44 years. 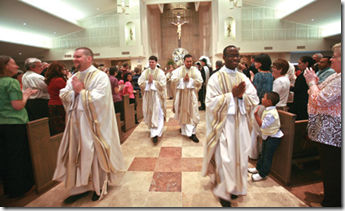 The Church the women - and the bishop - want

One of the panels at the conference was called When Bishops Listened to Women: The Women's Pastoral 12 Years Later. This panel was comprised of Sr. Mary Ann Hinsdale, Dr. Susan Muto, Dr. Pheme Perkins and Bishop Matthew Clark. Video and audio of this session can be found here.

After some introductory remarks by Sr. Hinsdale, Dr. Muto spent several minutes reviewing the history of what she termed the "Women's Pastoral." This was to be a USCCB Pastoral Letter outlining the concerns of women in the Church. Although it went through several revisions, the USCCB ultimately declined to adopt it.

Dr. Muto was followed by Bishop Clark. After some initial comments the bishop launched into the heart of his talk. What follows in blue is my transcript of His Excellency's talk beginning at the 23:25 mark:

I thought I might use my time this morning in a more future oriented way and to that end, that is, envisioning the Church women want, I thought, well, if I'm going to be consistent with what I believe in and the spirit of this conference, I'd better ask some women what they want. So I took the question to our St. Bernard's School of Theology and Ministry, which is a wonderful, small, graduate level school that we have. It's a great resource for us. It's president is Sister Patricia Schoelles, a Sister of St. Joseph and there are two full time faculty members who are women and some men who are [full time] and a number of adjuncts who are women. "So," I said, "what do we want to say to the people at Boston College?"

Let me share with you their thinking, which I want to say up front is very much my own [although] I might use a different word here or there. I would like to do that with one concrete image of the Church women want offered by one of the people I polled and six basic desires they have.

This brief story is by one of the women who teaches at St. Bernard's and [it's] her experience at a Sunday liturgy at St. Gabriel's Parish in Hammondsport, which is a small community on the south end of Keuka Lake, one of our splendid Finger Lakes.

There must have been thirty people taking leadership roles at the liturgy. A male, a priest originally from Sri Lanka, and a female, a sister, [the] pastoral administrator of the parish, led the congregation with the sense that neither was simply imported or a token figure. They seemed to invite others to assume a role in the service as well. The impression was given that this is our Church and we care for it and actively participate in it.

From the cantors to the preacher - the preacher a layman in training for diaconal ordination - to those who collected the song books and cleared the pews afterward, people participated, they cared, greeted each other and assumed a variety of roles in tending to whatever physical tasks needed to be done for the celebration. The spiritual communion, then, was so obvious and easy to enter into.

This isn't a big city parish filled with sophisticated people well versed in theories about emerging roles of women, but it was hard to imagine anyone sitting back complaining that "she shouldn't be doing this or that" because of an imposed or inherited view of what people are or are not allowed or intended to do. Instead, the clear sense was that this is our Church, we have a role in it, we own it, we care, and we are community in Christ.

Leadership clearly comes from within the parish itself. I suppose for those who prefer liturgy that seems more like theater - the leaders providing a program for the congregation - this would not have been as satisfying. But for me the kiss of peace alone in that parish was close to the most important experience of church that I have had in years.

That's the kind of Church she wants and I think she expresses that want very beautifully out of her own experience.

I'd like to mention, as I said - I'll mention them very briefly - six qualities, six encouraging notes, that these women look for in the Church.

The first relates to how the Church formulates its proclamations and teachings and I would say under that category they have three strong desires: First, that their experience be heard and honored, not argued with, but absorbed and integrated into the thinking of those who hear. Secondly, that a broad spectrum of voices should be heard before coming to conclusions that relate to teaching and polity of significance. They include specifically poor women and men, abused women, abandoned mothers, divorced women, gay, lesbian, single people, now thought to be absent from this kind of discourse, leaving us deprived of their experience and their insights. Thirdly in that basic theme that they seek to develop, a Church that is diverse and affirming of all, welcoming those who have been excluded, including varying theological perspectives, people whose backgrounds offer richness that clerics alone cannot possibly hope to have, and all manner of gifts and talents and life experiences. So, how the Church formulates its proclamations and teachings.

Secondly, how the Church deals with diverse opinion among the faithful: They want a Church that deals with issues and people and divergent theological opinion in loving and just ways, rather than what may seem to be a condemnatory manner or a dictatorial kind of manner. Many long for a Church that affirms the gifts of all members as we struggle to form communities dedicated to loving one another and building the kingdom of God.

Thirdly, on theological work that needs to be done in service of the Church women want: In terms of the theological tasks they're most concerned about they ask for the development of a more adequate theological anthropology, one that will adequately account for gender distinction in integrating our understanding of "imago Dei" and "in persona Christi". With particular emphasis they stress the need for that kind of reflection and inclusion in matters of sex and sexuality which does not sufficiently include consideration of women's experience.

Next, the exercise of authority in the Church: The general call is for a decentralized authority better able to serve the Church and the Gospel we seek to follow and embody. This includes a climate of honest and open dialog, granting to local churches - dioceses - the right to exercise their own identities, to call their own leaders, and respond pastorally to concerns and realities that arise in a given place and time and which may not be common to all places. Disagreement on matters other than creedal statements should not be feared, but a community of discourse in which truth is sought and celebrated should be encouraged and nourished.

Fifth, on Church activity and action: The Church needs to consider its call to reach out to those in need and to grant increasing prominence to action on behalf of justice as a constitutive part of preaching the Gospel. We need to search for ways to work toward genuine healing and not just sustenance for those who suffer from sickness, abuse, poverty, addiction, etc., but really to find remedies and cures for that. A Church that simply "maintains" and leaders who focus on extraneous or superficial goals are in no way the Church that women want.

Next, on the Church as a source of spirituality and help in leading a Gospel-centered spiritual life: They make considerable reference - and, I think, understandably so - to the stresses of modern life: too little time, too many expectations, the need for grounding and a firm sense of self and purpose, the desire to serve others while fostering mutual love, justice and responsibilities in our relationships and in society. Women want help from the Church in formulating a sense of priorities, in focusing and developing habits that would help lead a balanced life amid competing demands and increasing insecurity from any number of sources. Women I have talked with expressed the need to approach the Church as a community whose rituals and celebrations are rich in the authentic tradition that nurtures life and genuine relationship with God. Under that rubric of spirituality in a Gospel-centered life, if we fail to image God in appropriate ways, if we cannot assume the role of pilgrim Church assisting the disciples of Christ in their call to be present to those bearing the fears and anxieties of our time, then we will have forsaken our call and our mission.

Those are the main themes that emerged in my conversations with the St. Bernard's people. They are deeply consonant with the themes I have heard for most of the 25 years that I have served as bishop.

I thought of giving this a good fisk but decided instead to leave that as an exercise for the reader.  Suffice it for me to say that this is, in rather vivid detail, the Church that the women teaching at St. Bernard's would like to have - and would like the rest of us to have as well, whether we want it or not.  And, it seems safe to assume, this is also the vision these women have been inculcating in their students, whether those students be in training for lay pastoral ministry or in diaconal formation.

Also, since Bishop Clark says that he shares this vision - with the exception of "a different word here or there" - this is his vision also.  This is a well fleshed out picture of what he has been working toward for so many years now.

My thanks to the people at Boston College for recording this.  While I am sure it wasn't their intent, this serves as the most detailed explanation for the ongoing collapse of the Diocese of Rochester that I have yet to see.